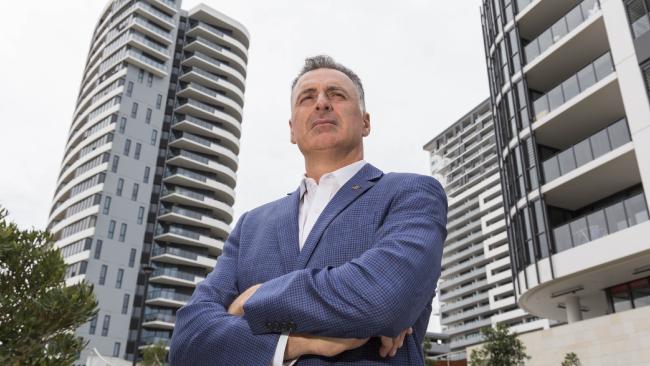 DEVELOPERS will foot the bill for new schools, parks and road upgrades to ease the pressure from thousands of new units planned for the inner west.

The State Government has released plans to pass the responsibility of paying for new infrastructure in rapidly changing suburbs to the developers who are set to cash-in from rezoning changes.

The strategy includes a $21,943 levy for each new apartment in the Rhodes East priority precinct that proposes 3600 units in buildings of up to 38 storeys.

It follows concerns that the rezoning changes, coupled with ongoing development at Wentworth Point, Olympic Park and Rhodes West, would leave amenities stretched to the limit.

The levy would earn the government $78.9 million to bankroll schools, parks, bike paths and a bridge to the western side of the Rhodes peninsula.

The Courier can reveal developer group Billbergia — which owns the majority of land in the Rhodes East precinct — has already released plans to fund a new 1000 space public primary school on Concord Rd.

It comes after assessments by the Department of Education found existing schools would not cope with the estimated 6795 residents moving into the precinct.

Drummoyne state Liberal MP John Sidoti said the levy on new units was aimed at avoiding a “horse before the cart scenario”, where new developments come before infrastructure and services.

“Developers stand to make a lot of money from the rezoning changes and they should be responsible for improvements to areas where the impacts are felt,” he said.

Mr Sidoti said the current system, where councils earn Section 94 contributions from approving major developments, did not require funds to be spent in the direct vicinity of new developments. Many councils also stockpile contributions – Inner West, Strathfield, Canada Bay and Burwood councils had $130 million in 2015-16, earning about $4 million a year in interest.

The Department of Planning said funds raised through the levy would include $25 million for upgrades to pedestrian and cycleways, $21 million for schools, $18 million for road upgrades and $9 million for open space projects. The funds, however, would not be used to upgrade Rhodes Station, which currently runs at 136 per cent capacity.

Transport studies for the precinct estimated additional southbound rail services would be needed by 2036 to meet demand from the Rhodes East development which would pack an extra 3200 people on peak hour trains and 500 extra cars on already congested roads.

As previously reported in the Courier, transport and building heights were areas of concern for some who did not want the area to become “another Barangaroo”.

A final decision on the plan is due to be made by Planning Minister Anthony Roberts later year.

THE inner west now has 10 postcodes where at least half the population lives in a flat or apartment, as Sydney’s high-density trend spreads further into suburbia.

Topping the list for high-rise living is the 2127 postcode, taking in Sydney Olympic Park and Wentworth Point, the analysis of the 2016 census shows.

In those relatively new suburbs, 80.4 per cent of the population said they were in a flat or apartment on Census night last August.

Research by demographers McCrindle for the Urban Taskforce found the number of apartments across Sydney rose from 65,000 to 87,000 between 2011 and 2016. Report author Mark McCrindle said the prevalence of families with children living in apartments represented a major demographic shift.

“Couples with children is one of the fastest growing segments in the apartment category,” he said.

Inner west suburbs with the least number of apartments were Haberfield (8 per cent), Sydenham (16 per cent) and Leichhardt (22 per cent).

Vertical families, cosmo couples and solo metropolites. These are the types of households researchers at McCrindle say are fuelling a rise in the number of Sydney apartment dwellers which are set to outnumber those in stand-alone homes by 2024.

COSMO COUPLES: WITHIN Sydney’s increasingly urbanised environment, more than a third of couples with no children live in apartments.
This burgeoning demographic is made up of both young couples and empty nesters. Their priorities are similar to vertical families, choosing their apartment location based on access to public transport. Urban couples live close to business hubs in areas such as Pyrmont.

SOLO METROPOLITES: SYDNEY’S largest apartment segment is made up of people living alone (34 per cent). Three in five are renters and the largest generation represented are Baby Boomers. Solo metropolites are more likely to be on low incomes – 34 per cent earn less than $36,400 a year. While they are likely to work full-time, nearly 25 per cent are retired and one in seven works part-time or casually

VERTICAL FAMILIES: Almost 20 per cent of apartment dwellers are families with children. This number has grown by 34 per cent over five years to 87,000. They are most likely to be young Gen Ys, with almost two-thirds aged between 23 and 37. For them, the greatest benefits of living in an apartment are the low maintenance (42 per cent) and the price (40 per cent).

ONE PARENT FAMILIES: SINGLE parents with children make up one in 12 apartment dwellers and numbers have increased by 14 per cent since 2011. Single parents living in apartments are most likely aged between 38 and 52 and are most commonly renting. Single parents prioritise their children’s wellbeing and education and can be found in transitioning urban areas such as Rhodes and Olympic Park.