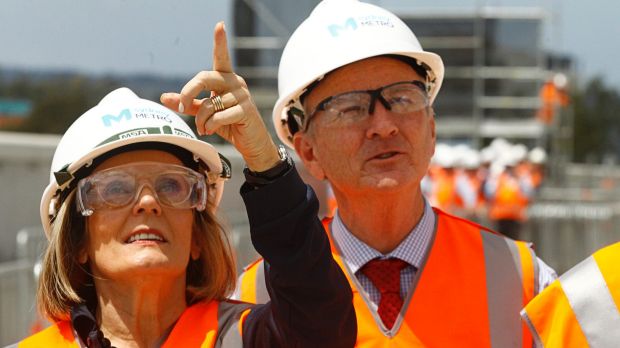 Two-thirds of Sydneysiders will be able to commute between their jobs, homes and key services within 30 minutes, but they may have to wait 40 years to do so, under new long-term strategies that will divide Sydney into three interconnected cities.

The NSW government claimed a “historic”, “first time” collaboration between its planning and infrastructure auspices as it released two 40-year strategies to transform Sydney into a tripartite metropolis with eastern, central, and western cities by 2056.

The three are a western parkland city, west of the M7, a central river city around greater Parramatta, and an eastern harbour city.

“Never before has planning and transport come together to actually map out a 40-year vision to make sure we grow properly in the future,” Transport Minister Andrew Constance said on Sunday, as he released a corresponding transport strategy.

Mrs Turnbull described the commission’s report as a “landmark” blueprint designed to dovetail with “a once-in-a-century period of Sydney’s infrastructure boom”, as Sydney expanded from its current population of 4.6 million to 6 million in 20 years, to 8 million in 2056 with most of the growth taking place in the west.

“This is particularly exciting for Sydney’s west, with an entirely new city to emerge west of the M7, where the new western Sydney airport and the surrounding aerotropolis will support tens of thousands of jobs.”

Currently, only 39 per cent of Sydney’s population can access jobs and services from their homes within 30 minutes. The government said the twin strategies would enable 70 per cent of people to access a “30-minute city” by 2056.

Planning Minister Anthony Roberts said the plans also provided the government with the blueprint to deliver “infrastructure to communities as they grow or before they grow”.

“[The plans show] what we need to do as a government over the next 20 to 40 years to ensure those hospitals and schools [are built],” he said.

“We needed a plan like this a generation ago.”

“You cannot build these three cities without having appropriate mass transit connections,” he said.

The strategy consolidated existing transport projects, such as the government’s signature Sydney Metro West project, which will put a Metro train line between Sydney’s CBD and Parramatta via the Bays Precinct at Rozelle, to be completed by the second half of next decade

Mr Constance said the Metro West was “a game changer in terms of connecting the three cities”.

The strategy also identified for the first time, although without detail, potential future mass-transit projects. The minister singled out for future investigation a train link between Parramatta and Kogarah, which would eliminate the need to travel via the Sydney CBD.

A future plan to link Norwest and Parramatta by train was also foreshadowed.

However, the plans have already generated criticism.

Liverpool City Council chief executive officer Kiersten Fishburn said she was disappointed a transport link between Leppington Spur and the new airport was listed as “for investigation” over the next decade, while the Metro extension from Bankstown to Liverpool was listed in the 20-plus years’ timeframe.

Opposition planning spokesman Michael Daley seized on the lack of granular detail in the plans, criticising the twin strategies as “600 pages of photos and gloss and blur”.

“It’s no wonder the government wants to talk about what is happening decades into the future because what’s happening in Sydney and NSW today is a mess. We’ve got a government that’s been in power now for seven years and they’ve not cut a ribbon on a single infrastructure project yet.”

The Draft Greater Sydney Region Plan and the Draft Future Transport Strategy are on public exhibition until December.

This story was found at: http://www.smh.com.au/nsw/lucy-turnbull-unveils-plan-for-three-sydneys-20171022-gz5un4.html